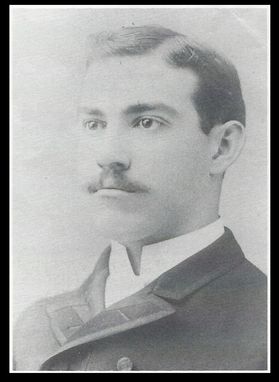 Most importantly, Will served as the president of the board of trustees or mayor of the city of Monterey
from 1905 to 1910. Will was a member of many societies, among them, the Monterey Masonic Lodge and Knights Templar in Watsonville. He was also master of the Monterey Masonic Lodge and a member of the Monterey Elks Lodge. He was a recipient of a special engraved sword from the Knights of Pythias, and the sword resides in the Mayo Hayes O’Donnell Library today.

The Monterey Herald states, “Will Jacks was loved by a large group of friends who admired him for his integrity, honesty and kindly interest in his fellow citizens. Among his acquaintances and business associates his word was always as good as his bond.” Will gave his family home, an estate of three acres next to the Presidio, to the Shriners. His charity reached so far that he left approximately $80,000 to the Shriners’ Hospital for Crippled Children in San Francisco. Will died on January 29, 1936, at the age of 69. His sisters, Lee, Vida, and Margaret, then took over the task of controlling the David Jacks Corporation and giving more money and land and providing more charitable deeds that mark their permanent place in Monterey history.

Will Jacks buried in the Monterey Cemetary, Cementerio El Encinal