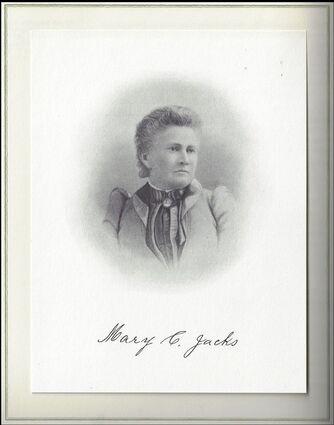 Maria Christina Soledad Romie, the future Mrs. Jacks, was born in Oajaca, Mexico, in 1837, the daughter of John Frederick Romie and Maria A. Frohn, who as natives of Germany emigrated to Mexico in 1835. Maria’s parents came to Monterey in 1841, where John Frederick set up a tailoring business.

Maria attended school under the tutelage of Dona Anita, the wife of one of the Castanares brothers, who taught children in Spanish to read, and to write, and to learn the rudiments of arithmetic, and most importantly to learn the catechism. Maria was one of the first pupils at St. Catherine's Academy in 1851. Attending Santa Clara College in 1859, Maria was well versed in Spanish, German and English. At the proper age, Maria attended the catechism classes of her future husband, David Jacks, at the Pacific House, where he taught for 42 years.

In 1861 Maria married Mr. Jacks in San Luis Obispo and made her residence in a small house on the property of Joseph Boston, who owned the Casa del Oro at that time. Mr. Jacks worked for Mr.Boston clerking at the Casa del Oro, and would later buy Mr. Boston’s residence and build his home on the three acres of prime land next to the Presidio. With all of Mr. Jacks’ land purchases, he could look in every direction from his home and say he owned the land as far as the eye could see.

From her home, Mrs. Jacks gave generously when the indigent came to her door for gifts of food. Maria, now Mary Jacks, raised seven of nine children who lived, and she and her husband kept a private teacher for their young children who all received a thorough and valuable education in the best schools and universities in the country.

“Industry, virtue and religion were the most important lessons taught by both precept and example.” (p.257 Coast Counties, “Central California”). The Jacks children exercised these lessons through the corporation their father formed to “make the world better, we each are under obligation to personally labor to make it better.” (Will Jacks) After David Jacks passed in 1909, Mary governed the trust set up by her husband for her and her children, and this corporation oversaw their generosity in providing money, collections of art and books and land until her death in 1917, when her son, Will, became president of the David Jacks Corporation. Mary is buried next to her husband in the Protestant cemetery in Monterey, the Cementerio El Encinal.