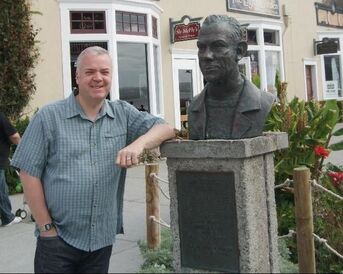 Kenneth Jack
Kenneth Jack is a 58-year-old retired Police Officer. He resides in Pitlochry, Perthshire, Scotland, with wife Moira. The couple have two sons and a daughter, all now adults who have flown the nest; they have four grandchildren, and a fifth is due in October 2019.

Kenny was raised in Crieff, Perthshire, Scotland, where the extended Jack family have resided for many generations. Kenny has been researching his ancestor, and fellow Crieff native, David Jack of Monterey, occasionally, since 1985. The fruits of his research into this controversial but interesting character from history, have been presented in various publications and fora over the years. He has also researched other members of David Jack's family. Apart from family history research, he is also a keen and active Freemason, and has extended his involvement in this field, by researching the subject, and his endeavours in this respect have also been published in many Masonic periodicals throughout the world.

He also enjoys spending time with family and friends, travelling, reading, and hillwalking. He has taken his interest in David Jack as far as he feels he can, but is always on the lookout for additional research and writing opportunities. 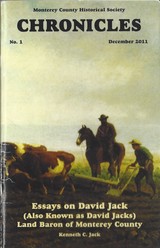 This document was graciously provided to us by Kenneth Jack via his friend Mr. Robert Johnson, and was originally published by the Monterey Historical Society, Chronicles, No. 1, December 2011.

In this booklet of sixty-some pages, the Scottish author, who shared family lineage through David Jack’s father (though by their progenitor’s two marriages), reminisces on his prominent ancestor in three essays: The essays are casual in style but accompanied by bibliographic and endnote material; they include fifteen photographs (persons, places, and papers), and the cover of the booklet is from an oil painting of “David Jacks on Horseback Monterey 1875.” The first two essays ably tell how Jack (who after arriving in California in 1849 became known as David Jacks) attained wealth and remarkably extensive landholdings that left him both admired and reviled. The author seeks fairness in recounting the rise to fame and fortune, and indeed, the third essay strives to balance Jack’s “monomaniacal,” seemingly obsessive land acquisition with accounts of his (and his daughters’) moral, social, and charitable character. Of value in this regard is a verbatim three-and-a-half-page “autobiography” by Jack centering on his religious service, elaborated on by the author. For the reader familiar with Monterey as a place, whether historical or contemporary, the three essays tell quite an interesting tale, with appearances by the likes of the Casa del Oro, the Pacific Grove Retreat Center, Robert E. Lee, and the Big Four of railroad legend (and the connection to “Monterey Jack cheese” is not overlooked).