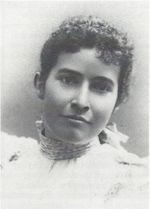 Mary Romie Jacks was born on November 4, 1869, and attended Mills Seminary in 1883 at the age of thirteen. Mary also studied at the University of the Pacific in San Jose, prior to her entry into Mills College in 1884. As postgraduate work, Mary pursued four more years of music study in Boston. Her sister Lee joined Mary in Boston and they took business courses together. Mary married Myron Isaac Thomas in San Francisco in October 1914. They lived in her father’s house on Van Buren Street in Monterey when they were first married, and Myron was employed by the David Jacks Corporation from 1911 to 1916. Myron was also a rancher and lumberman with extensive timber and ranch holdings in Monterey and Mendocino counties and in Vermont. Mary raised Myron’s three sons from his first marriage.

Like her sister Lee, Mary followed an active career in the family business:  “They served as administrative officers, including terms as president of the family owned corporation. They both handled their business affairs competently” (Mills Quarterly August, 1987).

Because of her commitment to the betterment of education, Mary gave generously to several educational institutions. “Through her residual trusts, Mills College received, without restrictions, a total of some $2.5 million, approximately $1.3 million in 1986 and roughly $53,000 annually between 1962 and 1985” ibid.

Mary and her sister Margaret purchased the Pacific Building in Monterey and the Stage Coach Inn near Soledad and donated them to California together with funds for their maintenance. Funding for the Monterey Sports Center was initiated by a donation of 4.5 million dollars which was donated by the Mary Jacks Thomas Trust Fund dating back to 1955. She was also responsible for donating the Jacks Ballpark and Jacks Peak Park. After she died, her sister Margaret took the “residual interest” from Mary’s $3 million estate and donated it to the city of Monterey.
The Jacks family values of religious, educational, social, economic and ethical practices that benefit the community leave a legacy unmatched by other wealthy California families.