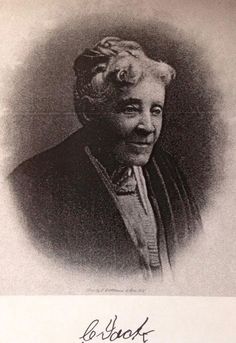 Just what a woman can do when she inherits the thrift of the Old World and Scotch (Scots) energetic sturdiness is shown in the interesting story of the life of Miss Christine Jack, particularly that part which has to do with her contribution towards making California history. She was born at Creiff (Crieff), Perthshire, Scotland, the daughter of William Jack, who first saw the light of day at Strathallan, in the same shire- a plain man, a dealer in wood, who died where he had lived, esteemed by all who knew him, bequeathing no doubt to his daughter, some of those personal characteristics which have contributed to make her so popular in Paso Robles, where she has long been a resident. Her mother was Janet McCune (McEwan), a native of the Scottish Highlands and a woman of rare attainments and worth.

William Jack married twice, and had by his first wife five sons and a daughter, and by his second wife a son, David, and two girls: Margaret, who died in early childhood, and Christine of this review. David was born in 1826 (1822) attended the public school in his village, and at the age of seventeen (nineteen) crossed the ocean to New York, where he secured a position as a bookkeeper with the firm of Flood, Mackay & O’Brien. Six years later he made for California via Panama, and at Monterey again took up bookkeeping. He acquired some land and became a farmer and stockman, and soon owned several large tracts in various parts of Monterey County. He settled in Monterey, where he died at the ripe age of eighty years (86). Mr Jack married and was blessed with seven children, all of whom are living. In 1857 he was able to revisit Scotland and see his boyhood home. As a Presbyterian and a Republican he made his contribution to the bettering of both religious and political conditions in the country of his adoption.

In 1866, her parents having both died, Miss Jack joined her brother in California, travelling by way of New York, from which city she set out on the steamer “Caledonia”, bound for the Isthmus of Panama, and after crossing that strip of land took the steamer “Arizona” for San Francisco. She lived for a time with her brother at Monterey, when she bought a ranch Josephine, in San Luis Obispo County, operating it for twenty years. She made a large stock ranch of her possessions, raising shorthorn Durham cattle. She had a dairy of forty-five cows, and churned three times a week, turning out more than a hundred pounds of butter at each churning. The milk was panned and skimmed by hand, Miss Jack doing all the work herself. Such was the quality of the butter that it was rated as the best in San Francisco market; and such, too, was the care that she gave her cows that each knew her voice and would come to her. A mile away from her nearest neighbour, she never suffered from loneliness; for she cooked and did all the work required at the ranch house, even to washing and scalding the pans. She was in fact very busy, undertaking, in addition, to raise calves and hogs.

On account of rheumatism, Miss Jack nine years ago came to the Paso Robles Hot Springs, and there she has remained, for the most part, ever since. While working her ranch, some fourteen hundred acres at the head of Santa Rosa creek, she discovered a quicksilver mine on the property which she named the “Bonnie Doon”: and the mine of cinnabar ore she worked for many years, putting in a retort and manufacturing quicksilver. While she was visiting the mine one morning, the shaft of which had been left carelessly uncovered, she walked into it and fell a distance of three hundred feet to the bottom, and was so seriously injured that her frame was shattered and several bones broken. She was rescued and brought to her residence; and very fortunately, by good surgical attention, she fully recovered.

Miss Jack once had a peculiar experience where a dog came to her assistance. She had made a trip to Cambria, and in the meantime a hard rain-storm had broken; and, returning home on horseback - having declined an urgent invitation to stay all night with some friends, thinking she must get back home- she found Santa Rosa creek had become a raging torrent. On reaching a certain crossing her mare, Fannie, refused to swim the flood, though urged in every possible way; and finally, when Miss Jack was despairing of getting across, a mysterious dog came out of the storm. When its intelligence grasped the situation, it looked up at Miss Jack, and then at the horse, and plunged into the stream; after which the mare, evidently inspired by the example, followed and carried her mistress safely over.

In the old days at the ranch when she used to get up at four, and sometimes at three o’clock in the morning, she kept things lively at the mine; but finally she sold the ranch and leased out the bonanza. Now, in her years of leisure, she resides with her companion, Mrs. Mary Doling, taking a keen interest in her Park Street home and in the little social world about her, particularly in the works of charity undertaken by the Presbyterian Church; and not failing to follow the devious ways of politics, she shows the keenest interest in republican affairs. Miss Jack is a very liberal and generous- hearted woman, and she seems never to become weary of well-doing in spite of often being imposed upon; she always has fed the hungry and weary travellers who come to her door, and still she is ever ready, so far as she is able, to assist those less fortunate than herself. She is well and favorably known, and everyone speaks of her in the highest terms of appreciation.