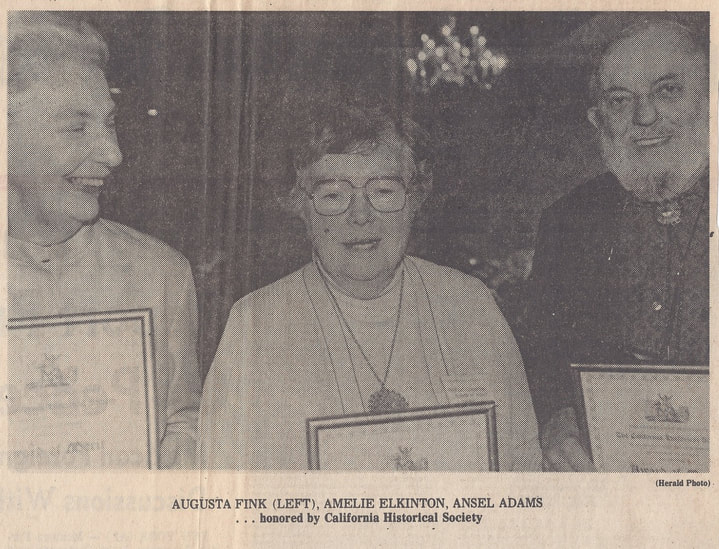 Born Oct. 22, 1905, in San Francisco, Mrs. Elkinton came to make her home in Carmel in 1929.  She had lived for a time on the Monterey Peninsula as a child when her father, Joseph Nichols, built one of the first canneries on what was to become Cannery Row.

Mrs. Elkinton was curator in the area for the state Department of Parks and Recreation.  She held the post for 12 years, serving at a number of local adobes.

A founding member of the Monterey History and Art Association in 1931, she served as secretary of the organization for many years.  In 1974, the organization recognized her with the Laura Bride Powers Award and in 1986 made Mrs. Elkinton an honorary life director of the association.

She was the editor of the association’s publication, Noticias de Puerto de Monterey, for 20 years.

Mrs. Elkinton served on the Monterey Property Council of the National Trust for Historic Preservation, working on the Cooper-Molera adobe restoration.  She was also a regional vice president of the Conference of California Historical Societies and chairman of the Monterey County Historical Advisory Commission.

In 1982, the California Historical Society gave her a merit award for her contribution to the preservation of California’s heritage.

She was a member and past president of the Native Daughters of the Golden West, Junipero Parlor 141 and a member of the Big Sur Land Trust.

A source of genealogical data and research for many books of local interest, Mrs. Elkinton co-authored the book “Juan Bautista Rogers Cooper” with the late John Woolfenden.

She was a charter member of Community Church of the Monterey Peninsula and served on many committees in the local community.

She graduated Phi Beta Kappa from the University of Washington, where she joined the Delta Zeta Sorority.  She remained an active member of the sorority throughout her life.

Memorial services will be held Sunday, Oct. 4 at 3 p.m. at Community Church of the Monterey Peninsula.  Cremation will be at the Little Chapel by-the-sea, followed by inurnment at El Carmelo Cemetery in Pacific Grove.  The Paul Mortuary is in charge of arrangements.

The family suggests that any memorial contributions be sent to the Monterey History and Art Association, the Association of the Maritime Museum, the hymnal fund at Community Church of the Monterey Peninsula, the Carmel Valley Manor Medical Unit or to the donor’s favorite charity.