David Jacks:  The Man and His Reputation 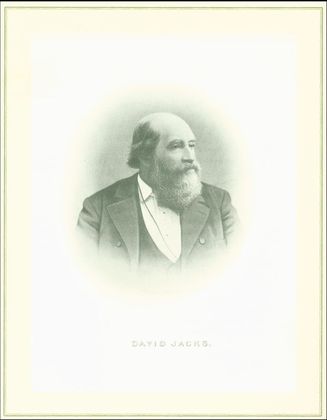 From a poor family in Crieff, Scotland, David Jack was born on April 18,1822, and rose from an immigrant with no future to the greatest landowner in Central California, and one of California’s greatest philanthropists.

David had five stepbrothers and one stepsister and one full sister, Christina, some years younger. David describes his early years in Crieff: "Worked in a woolen factory during my 12, 13, and 14 years. There were as near as I can recollect about twenty boys and girls. Commenced work at 6 in the morning and got to 9 to 10 o’clock for breakfast and 2 to 3 o’clock for dinner. Left off work for the day at 7 o’clock. Almost all the boys and girls were Sabbath School children."
David Jacks,
Autobiography,

He also describes his devotion to his faith:

"Became a Church member very young. Think it was a great benefit and good to me
in all after life because I had to remember and realize that the eye of God was always
upon me. Seeing whether I was true to my promises to him. And also remembering
that the eyes of the worlds’ people were upon me, to see if I was true to my promise
to God when I became a Church member."
David Jacks,
Autobiography,
Huntington Library manuscript

Raised at his mother’s knee learning his catechism, David wanted to be a Presbyterian missionary by going to the East Indies to serve his faith. However, other factors intervened, and he left the family farm to join two of his step brothers in America.

David Jacks spent 59 years in Monterey and built a home and business for his family that lasted 112 years. Arriving in America in 1841, he worked for seven years in the New York area, including a stint at Fort Hamilton, where he met Robert E. Lee, and learned several trades. While working and living in the New York area, David states in his autobiography:
"Came to New York and Brooklyn, Long Island, early settled by the Dutch, became a
member of the Dutch Reformed Church, by my Church letter from my Presbyterian
Church in Scotland, and was very kindly treated by them from August 1841, to near
the end of 1848. Attended Sabbath School as a scholar and helped if needed as a
teacher, in the Dutch Reformed Church in Williamsburgh, which afterward became
part of Brooklyn. Then moved to Fort Hamilton and became a member of the Dutch
Reformed Church of New Utrecht. The Minister claimed to be half Dutch and half Scotch,
had to travel three and a half miles to church while living here. Was treated very
kindly by all people, and from time to time it was intimated that I might take one of
the daughters to wife and settle down for life."
David Jacks,
Autobiography,
Huntington Library manuscript

After reading Rev. Walter Colton’s description of California and the gold rush in the New York Herald in 1848, David ventured forth and sailed around the Cape to land in San Francisco that same year. With revolvers, jack knives, etc., in his pocket and the sense to sell them at a good price, he earned $4,000, became a naturalized citizen, and at some point, changed his name to Jacks for an unknown reason.

At the Presidio of San Francisco, David learned the business of customs and tax collection which would serve him well in Monterey. When business sent him to Monterey in 1850, David could not resist the siren song of a new life, beginning with his clerkship with James Boston at the Casa del Oro, and then with James McKinley, another Scot, for two years. Initially, David lived with the Boston family and enjoyed his home so much he wished to purchase it, and he did. He built a beautiful hacienda with eight bedrooms on the three acres next to the Presidio; from his hilltop home he could view all of his land as far as the eye could see.

Staying true to his religious life, David immediately made himself known to the Rev. Willey, who administered the Sabbath School in Monterey. Dr. T. L. Anderson and David continued the Sabbath School after Rev. Willey left. With David’s money, the first Presbyterian Church, or David Jacks’ Church, was established on July 8, 1883. Because of his dedication and commitment to the church, David was ordained and installed as an elder, one of three, on September 16, 1883. For a brief time, a second Presbyterian Church was established in the Pacific Hall Building, donated by David. The two churches united on April 4, 1900. David set up scholarships for theological seminary studies and gave generously to the churches in San Jose, Palo Alto, Watsonville and Boulder Creek, California.

With his sharp business acumen, David Jacks soon became the treasurer for Monterey and was involved in lending money to land-rich ranchers, who needed to pay taxes under the new American government. All the records show that he acquired his total of 100,000 acres legally. This is especially true for his greatest acquisition, the pueblo lands of Monterey. These lands were granted to the municipality of Monterey by the Mexican government in 1830. With all American acquisitions, it was necessary for all Mexican grants to be confirmed by the U.S. Lands Commission. City attorney, D.R. Ashley obtained confirmation for the town, but there was no money in the treasury to pay legal fees totaling $1,002.50. As a result, the lands had to be auctioned, and so on February 9, 1859, at 5:00 p.m. in front of the courthouse, David Jacks and Delos Ashley bid for the amount due and gained title of 30,000 acres of Monterey land. When the city decided to challenge this purchase, the case went to the U.S. Supreme Court, but after almost 20 years of argument, the Court ruled in Mr. Jacks’ favor. As time passed and his children took over the control of his properties, much of the city land was gifted back. As H. H. Bancroft, the noted historian states, “Mr. Jacks came into possession of his estates, on the whole, by fair dealing through force of that good fortune, business judgement and character which are very generally admitted to be the birthright of the Scotch” (Noticias del Puerto de Monterey, March 1989).
In 1861 David Jacks married Maria Christina de la Soledad Romie in San Luis Obispo and they raised seven of nine children born to them. Jennie and Frederick Ernst died young. As parents, the Jacks raised their children to be industrious, virtuous, and religious. Schooling began with tutoring in the home, and then further studies in the finest universities in the country. This sound education and rearing prepared the children for their roles as directors for their father’s corporation and started the eventual bequests and gifts which totaled millions of dollars. At one time, the David Jacks Corporation owned the lands of Monterey, Pacific Grove, Pebble Beach, Fort Ord, and up to Moss Landing, and country extending from the Salinas River to Castroville to Salinas to Chualar and Gonzales on to Soledad. Parcels of land were also held in Santa Cruz, Santa Clara, Alameda, San Francisco, and Kern Counties (Mills Quarterly August 1987).

David used his land acquisitions to benefit all the citizens of Monterey. He became a treasurer for the company which built the narrow-gauge railroad between Salinas and Pacific Grove, and he personally invested $75,000 in the Monterey and Salinas Valley Railroad, and it was completed in 1874. After investing another $40,000 to keep the railroad running despite flooding and droughts, his efforts galvanized Charles Crocker and the Southern Pacific Railroad to enter the picture and build a regular railroad, which ultimately started the tourist business as San Franciscans traveled to Monterey to stay at the Del Monte Hotel, which became a world renown resort. David Jacks also sold the Pebble Beach properties to the Big Four: Mark Hopkins, Charles Crocker, Leland Stanford and Collis P. Huntington, who directed the Pacific Improvement Company. Samuel F. B. Morris was hired as CFO for the company, bought the Pebble Beach ranch lands from David Jacks and built the first Pebble Beach Lodge. In 2017 the tourist industry made 2.85 billion dollars for Monterey County.

In addition to his civic and business dealings, David Jacks was a very religious Presbyterian, and he attended the San Francisco Methodist Episcopal conference in San Francisco in May 1875. The elders convinced Mr. Jacks to lend his money and support to the area called Pacific Grove, where a seaside resort for holding annual camp meetings could be established. David advanced $30,000 to provide tents, cottages, furnishings, food and encouraged other businesses to invest in Pacific Grove. (Monterey Daily Cypress, Jan. 12, 1909). He also sold 100 acres to the retreat association for one dollar and influenced the Pacific Improvement Company to add more land for a nominal fee. The camp proved to be successful and Methodists from all over California attended these retreats. David sold 300 acres to the city at 1 dollar an acre. Pacific Grove is now a major destination for tourists from all over the world.

David Jacks spent a lifetime learning valuable trades and conducting business with the most influential men in California. He purchased the land that would ultimately be enjoyed by generations of Monterey citizens. From a small town of adobes and a port and a population of only 1,000, David Jacks built a railroad, supported a religious retreat, sold his land for worthwhile enterprises, and left his fortune to his wife and children, who, in Monterey County alone, gave to the state Casa del Oro, the Custom House, the old Pacific Building. Don Dahvee Park (Jacks’ Mexican name), Jacks Ballpark, Washerwoman’s Flats, Iris Canyon Park, Jacks Peak Park, the land for the Monterey Sports Center, and a recreational park area for Ryan Ranch, all major land gifts. The gifts to institutions such as Stanford, Mills College, the University of the Pacific and more are the legacy that reflects the generosity and love for California to which this pioneering family devoted their lives.

David Jacks died in January 11, 1909, at the age of 87. His legacy will serve many generations of the future.