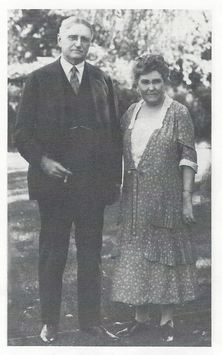 Janet Jacks was the eldest child of David and Mary Jacks (an infant died in 1862); she was born in Monterey, California, in 1863.  There is very little record of Janet’s early years, but she was bright and did well in school as she was accepted as a student at Cornell University, in New York.  It was at Cornell that Janet met her future husband, an electrical engineering student named Allan Balch, who at the time was working in a blacksmith shop.  Janet apparently brought her horse in for shoeing and a match was made for more than horse shoes.  Janet and Allan were married in April 1891, and soon moved to the West Coast, where Allan began his engineering career.

At this point, Janet seems to fade behind the very large shadow of her husband, who after some initial bootstrap financial support from Janet’s father, was highly successful and became very wealthy developing electrical power generation and gas distribution systems on the West Coast, first in the Seattle area, then in Portland, and then in California.  He partnered with William G. Kerckhoff, and together they founded or developed power companies in San Gabriel and San Joaquin, gas pipelines for the Los Angeles area, and power plants used for the Los Angeles light-rail (red car) lines, and in addition owned several small power generation systems that were eventually sold to Pacific Gas & Electric making millions of dollars through the sale.

It is interesting that, although they became life-long residents of Los Angeles, they seem never to have owned a home.  Instead, census records reveal that Allan and Janet lived in luxury hotels throughout their lives.  The 1920 census has them living at the Hotel Alexandria, the finest hotel in Los Angeles at the time; they apparently moved to the ultra-luxurious Biltmore Hotel after it opened in 1923 as the census records for 1930 and 1940 show them at that location, and Janet was a resident at the time of Allan’s death in 1943.  They apparently had a multi-room apartment at the Biltmore as the census indicates that a secretary and lady’s maid lived with them.

Janet and Allan were music lovers and art collectors, and their wealth enabled them to develop a large art collection, which they eventually donated to the Los Angeles County Museum of Art.  They made generous donations to universities funding buildings at Cornell (Balch Hall, a large women’s dormitory), at Scripps College in Southern California (Balch Hall, an auditorium), and at the California Institute of Technology (the Athenaeum, the faculty club and visitor residence). Allan and Janet also donated land in Tulare County specifically for the creation of a small but beautiful park in the Sierra foothills; Balch Park still exists and is open to the public. They also were supporters of the Los Angeles Philharmonic Orchestra and donated money used to build the Hollywood Bowl; the Philharmonic played at Allan’s funeral.

Allan and Janet both passed in 1943.  They are entombed within a private crypt at the Grand Mausoleum, Forest Lawn Cemetery, Glendale, California.