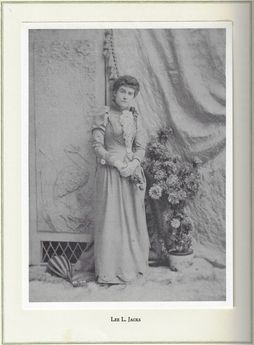 Lee L. Jacks, one of the three unmarried daughters of David Jacks, changed her name from Louisa Lincoln to Lee L. Born in 1865, Lee first attended the University of Pacific in San Jose and then entered Mills Seminary in 1884, where her sister Mary also attended, and Lee graduated in 1887. Lee furthered her studies in languages and art in San Francisco, Oakland and New York. She and Mary also took business courses together in Boston.

After the David Jacks Corporation was dissolved, Lee, Mary, and their sister Vida all served as administrative officers for the new corporation, called the L.M. and V. firm, which was formed to advance and improve the success of the David Jacks Corporation, which was set up in 1907. Of all three girls, Lee was the most successful in running the family business and held it together for the longest period.


As president of the corporation from 1915 to 1919, she worked  to bring the firm
into compliance with the new laws on income tax, industrial accidents, and
banking, which required a renovation of its accounting procedures.
She knew all parts of the Jacks property well and dealt skillfully with tenants.
They ranged from the Spreckels Company which grew beets in Soledad to a
Berkeley householder who grazed her cows on Jacks city lots near her home.
Lee relished her work.
Mills Quarterly August 1987

As head of the L.M. and V. Jacks partnership, Lee became interested in providing their Salinas Valley farm land with adequate irrigation. By the time of her death in 1941, she “had brought under irrigation two-thirds of the approximately 10,000 acres the firm held.” This was a successful enterprise because it was the first of its kind in the region and because other farmers followed her lead. In 2016 Monterey's produce, the fourth largest agricultural producing county in California, was valued at 4.25 billion dollars..

All of David Jacks children were familiar with their father’s policies of responsible
land use, of firm contracts granted to farmers, of consultation with experienced people
and experimentation in finding the most profitable use of the land, of humane but no-
nonsense labor policies, adoption of new types of equipment and methods of irrigation
as well as land improvement for subdivision.
Mills Quarterly August 1987

Lee L. Jacks died in 1941 and is buried with her parents and three of her siblings in Monterey’s Protestant cemetery, the Cementerio El Encinal. In her will, Lee Jacks left her estate to be shared between the University of California, Stanford, and the California Institute of Technology.