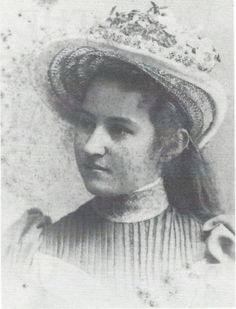 Margaret Anna Jacks was born on June 24, 1874, and next to her father, David Jacks, became one of the most important humanitarian philanthropists in Central California. Born in Monterey, California, Margaret attended the Cole Grammar School in Oakland, the Boston Girls’ Latin School, Radcliffe, and finally, Cornell, where she graduated in 1895. “Margaret confided to a friend that she wanted to become a teacher” (Alta Vista Magazine, May 12, 1991), but her passion for Monterey matched her father’s; “she loved the small town with whitewashed adobes and red-tiled roofs.” Ibid.

After the death of her parents and her brother Will’s dissolution of the David Jacks Corporation, Margaret and her sisters Lee and Vida created the firm of L. V. and M. Jacks to continue the successful enterprises to which the entire family had contributed. Margaret served on the Monterey Planning Commission and Architectural Review Board to maintain the beauty of homes and historical buildings. She was a founding member of the Monterey Art and History Association and the Monterey Foundation. Margaret brought to Monterey the Chapter of the Red Cross, where she was recognized with the resolution that was adopted and tendered by the committee:

Whereas:  our President Margaret A. Jack who, by her efficiency and enthusiasm,
has aroused interest in the league among our citizens, which we feel has been a
benefit to the community, binding hearts together in one common cause and
helping all men to feel that they are brothers, and has endeared herself to the
members of the Monterey-Pacific Grove Red Cross League by her untiring efforts
in behalf of the same that through it hundreds of our brave boys who are fighting
for the rights of humanity and for the honor and protection of our beloved land
may and have been benefited….
Kenneth C. Jack
Chronicles Dec. 2011

After her sisters Lee and Vida passed, they left their enormous fortunes to many institutions and to Margaret, knowing that she would provide financial assistance and significant property for Monterey and the state of California in perpetuity. The Custom House, Pacific House, the Memory Garden, Casa del Oro, Lake El Estero, Jacks Peak Park and Ball Park, Washerwoman’s Bay, Don Dahvee Park, Iris Canyon, Friendly Plaza, Los Coches Adobe (near Soledad), land for the Monterey Sports Center, and a recreational park for Ryan Ranch. “In 1960 Margaret donated the Jack-DeHaven Art Collection to the Monterey Public Library.” Ibid. On April 7, 1960 Margaret was commended for her contributions to the Monterey Historic Park system by the California Senate. Additionally, she was honored with an Award of Merit by the California Historical Society. A special collection of 15 paintings and 15 etchings, the Jacks-DeHaven collection, was given to the Monterey Public Library. Margaret requested that the city find a proper gallery to show the artwork, worth thousands of dollars, and to provide a gallery for local artists.

Like her sisters Lee and Vida, Margaret never married, but she devoted her life to religious, civic, humanitarian, historical, environmental, educational, and hospitals. The Department of English is currently housed in the Margaret A. Jacks wing at Stanford University on the north side of the outer Main Quad. Margaret left over two million dollars to Stanford University among her many bequests at her death.

Margaret died on April 11, l962, and following her death, the “flags on all public buildings in Monterey hung at half-mast in grateful thanks to all she had done for the community of Monterey.” (Chronicles, Kenneth C. Jack)