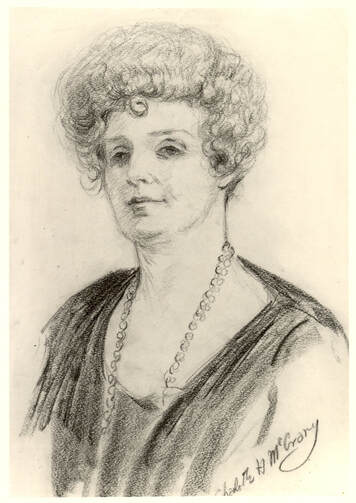 THE REMARKABLE
MRS. LAURA BRIDE POWERS
HER LEGACY LIVES ON

Laura Bride Powers was a lady of considerable note who accomplished more than any other person to first stimulate the preservation of Monterey's history.

She was a foremost authority on California and Monterey history and a prolific writer on the subject. Her writings reflect her hallmarks - facts and truths, not opinions and fantasies.

Born in Virginia City, Nevada in 1867, she spent her adult life safeguarding California's past, and particularly that of the Monterey area, for posterity. Before moving to this area, she settled in San Francisco and founded the "California Historic Landmarks League."

In 1931, she was the prime mover in the creation of the Monterey History and Art Association and is credited with its time-honored purpose - to help preserve the irreplaceable reminders of the years gone by. She also was the founder of the museum in the Old Custom House and its first curator.

Mrs. Powers was the architect of the Association's marvelous and traditional Merienda - the annual celebration of the founding of Monterey on June 3, 1770 by Father Junipero Serra and Captain Don Gaspar de Portola. Father Serra, in particular, was very special to her. This motivated her efforts to ensure that Carmel Mission remained an active parish.

A lovely person, she has been referred to as "a lady of style, good character and humor, with intense blue eyes and curly red hair," which clearly reflected her unforgettable and indomitable spirit. Her never-give-up philosophy and strong convictions helped Monterey to become the vessel out of which flowed the future of the Golden State. Her intuition was indeed correct, for California truly began here in Monterey.

Laura Bride Powers passed away in 1947, at the age of 80. Through her efforts to preserve the historic landmarks, artifacts, and dramatic events of the area's renowned past, the evidence of which still surrounds us, she will remain forever in our memory. The cherished Laura Bride Powers Award, given to an individual whose community service reflects the generosity and commitment of Ms. Powers, is named after this remarkable woman.

The most prestigious award given by the Monterey History and Art Association each year is the Laura Bride Powers award, named after the founder of the Association.

It was in the depths of the big depression that she came to Monterey, already a noted historian and one-woman vigilante committee for the preservation of adobes.

She came to Monterey as the first duly appointed curator of the First Theater in California. She continued in that capacity and as curator of the Old Custom House Museum until her departure in 1937.

In 1930 she organized a committee of those interested in beautification and preservation and called the first meeting for Nov. 18 at Cadematori's restaurant. The restaurant, landmark in itself, flourished for many years in the Casa Serrano, a historic adobe which was destined far in the future to become the headquarters of the Monterey History and Art Association.

But the night of Nov. 18 it was still a restaurant, and the Association was just aborning. The dinner meeting of artists, and history enthusiasts was called to order by Carmel Martin, prominent attorney, former mayor and city planner. Articles of incorporation for the new organization were signed by 15 people of considerable vision. They were read at the first official meeting of the Association on Jan. 19, 1931. And Col. Roger S. Fitch, commandant of the Presidio of Monterey was elected the first president.

Mrs. Powers continued to serve on the board of directors of the Association until her death in 1947.  Born at Virginia City, Nevada, Mrs. Powers was reared and educated in San Francisco. She published her first book on the California missions in 1893.

In 1902 she organized the California Historic Landmarks League which played an important part in the acquisition of Sonoma Mission and Fort Ross. She also devoted much of her time to preservation of Mission San Antonio de Padua at Jolon.

She served on the staff of the San Francisco Morning Call from 1902 to 1906 as art, club and social editor. She was also a feature writer for the Oakland Tribune from 1913 to 1925.  She was active in the Women's Suffrage League. And was a member of the California Historical Society from its organization in 1922.

Her last book, "Old Monterey: California Adobe Capital", was published in 1934 and is still regarded as a valuable reference work.

In 1975 her papers, including extensive correspondence with California political figures and historians, annotated publications on California history, photographs and newspaper clippings, were presented to the California Historical Society Library manuscript collection. The valued collection was the gift of Mrs. Powers' daughter, Mrs. George Adrian Applegarth, of San Francisco. The papers include correspondence between Mrs. Powers and Joseph R. Knowland, publisher of the Oakland Tribune and member of the state parks commission, conservationist and political leader. Dr. Herbert Eugene Bolton, the historian, was also a correspondent, as was Col. Roger S. Fitch, commandant of the Presidio of Monterey and first president of the Monterey History and Art Association.

After her arrival in Monterey, Mrs. Powers roused the local citizenry by debunking several treasured local legends including that of the Sherman Rose. Her article in the Monterey Peninsula Herald stated as a matter of fact that the story of the Spanish senorita who was promised by the young Lt. Tecumsa Sherman that he would return to claim her "when the rose tree blooms again," and then broke her heart by failing to do so, marrying a social belle in the East, was a figment of a poet's imagination, as indeed it was.

But the letters to the editor columns of the newspaper were filled for weeks afterward with indignant and angry letters branding her as a spoilsport and worse. It was the simple truth, she replied, and as a historian, she had no alternative but to tell it like it was. History, she always insisted, was fascinating enough in itself without embroidering it with fiction.  And as time went on, although jolted again and again by her dashing of their legends, the local citizenry realized that her Herculean efforts on behalf of preservation of Monterey's historic past more than made up for their loss of many cherished fables. And the Sherman Rose house, where the rose bush bloomed, which once stood on the corner of Alvarado Street and Bonifacio Alley, where the Crocker Bank now stands, was preserved nevertheless, and was transported brick by adobe brick to the Monterey Mesa where it stands to this day.

Perhaps it might be summed up best in the words of Padre Laurence Farrell, History and Art chaplain, in his invocation at the 50th anniversary celebration of the Association at the Naval Postgraduate School on Jan. 18, 1981: "Laura Bride Powers was the moving force behind the founding of this admirable association and I am proud to say she was a good, close and loyal friend of mine. She had the heart, mind and soul of a poet but she possessed the will of a Hipolyte Bearchard.

"In her charming book 'Old Monterey', she asked the rhetorical question (of Hipolyte Beauchard), 'Pirate or Patriot?' We can ask the same question about her in a kindly way and the answer is 'both.' Fifty years ago, she dragooned the leading citizens of this Peninsula into this organization which she affirmed was to safeguard the written history, the artifacts, and the remaining adobes and the artistic traditions of Old Monterey. She did this in the nick of time; she accomplished her goals and these objectives have been the purpose of the Monterey History and Art Association and the reason for its success this past half century.

"The Holy Scripture says: 'By their fruits you shall know them.' Monterey, California and the nation owes an inestimable debt of gratitude to those who manned the ramparts before it was too late."  And Laura Bride Powers led all the rest. 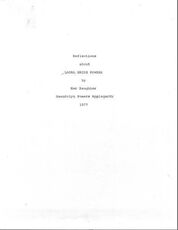