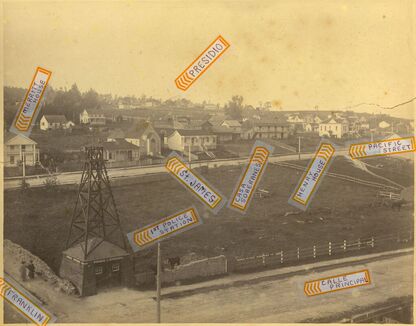 Pacific Street, Monterey circa 1900
A young woman named Lou Henry lived with her parents and sister on Pacific Street in Monterey in the decade before the turn of the 20th century.  She lived across the street from the home of Father McGowan (whose church was also a near neighbor) and his pediatrician wife.  Also just down the street were the Soberanes and Serrano families, as well as, the artist Charles Rollo Peters and the home of Judge Merritt.  In the other direction a short distance was the First Theater, and one street uphill and a quarter mile westward was the mansion of David Jacks on Van Buren Street, across the street from the Doud House.

Florence & Charles Henry
Lou Henry was born in Waterloo, Iowa in 1874.  Lou Henry’s parents, Florence and Charles, moved to Monterey in 1890 having also lived in Whittier, California, and Texas.  Her father was a banker and was well known in the Monterey community.

Vida Jacks
Lou Henry attended California Normal Schools in Los Angeles (known today as University of California, Los Angeles) and San Jose (known today as San Jose State University) and received her teaching credential in 1893 at San Jose.  Normal Schools provided a path from completion of secondary school to a teaching career. Lou taught at the local school in Monterey.  It was while teaching in Monterey that she connected with the family of her neighbors, the David Jacks family. The connection, through the children, included home-schooling Vida Jacks the youngest of the Jacks children, 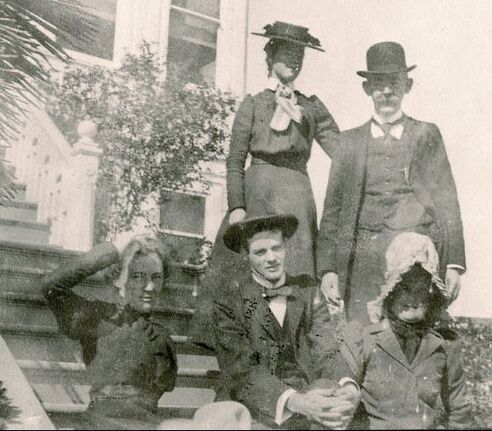 Wedding Photo, Lou standing with Herbert seated in front. Lou's sister on the left and parents on the right
Lou and Herbert left the day after the wedding for China to pursue his engineering career.  Lou became the First Lady when Herbert was elected President.  Although they visited the Monterey area from time to time staying at the Del Monte Hotel, they did not take up residence in Monterey.  After Herbert’s term as United States President, he became President of Stanford University and he and Lou built a home and lived in the Palo Alto area.  This home is still in use as the official residence of the President of Stanford University.
Several of the photos in this article were generously lent from the Hoover Presidential Library in Iowa.  Others are part of the photo collection at the Mayo Hayes O’Donnell Library.