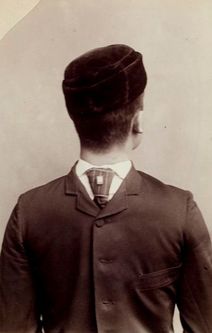 There is no known photo of Romie
Romie Carl Jacks, the younger of David Jacks’ two sons, was born in 1876. Lou Henry, who married Herbert Hoover in 1899 and eventually became a “First Lady” of the United States, was a good friend of the Jacks family, and a special friend to Romie.  They enjoyed fishing trips and horseback rides. She writes him a letter when he attends school in San Rafael, California, and in his reply it is clear that he loves adventure, travel, and excitement. On March 12, 1895, Romie writes to Lou Henry in the hope that they can share part of their summer:

I have ten days at Easter, couldn’t we do something then? Trout season will be open and we could go down to the Little River or some such place.

I expect to spend the first part of my vacation in Monterey, but I want to spend a part of it somewhere else. I am very anxious to go to Yosemite this summer, but I don’t know whether I can or not.

I would like to go to Monterey in April while the Knights of Pythias are there. It will seem kind of funny to see the town with a little bit of life in it.

I have been riding my bicycle a good deal lately, a week ago last Saturday I rode from here to Petaluma and back. It is about twenty-five miles to Petaluma, so I made over fifty miles going and coming.
Your friend,
Romie C. Jack
(from Kenneth C. Jack,
“Friends in High Places”)

Romie also attended the Lawrenceville Academy in New Jersey and went to school in Davisville (now Davis, California). Before her death, his wife, Mabel Williams Jacks, placed in her will the provision that her estate be used to fund the college education at Davis, in fields of the students’ choice, of those who were members of a 4-H Club or the Future Farmers of America.

Romie was a member of the family business, managed the Abbott Hotel in Salinas, and owned property in Monterey, San Luis Obispo, and San Francisco counties. When the corporation was dissolved, Romie moved on to develop a section of Monterey and then to live in San Francisco. He established a water system in the Monte Regio area, or Peters Gate, where he owned a home. He was a life member of the Salinas Lodge No. 614, and he and brother Will were among the founding members of the Salinas Royal Arch Chapter of Freemasons. Romie and Mabel owned a Templeton Crocker estate called “The Uplands” in Hillsborough, which created a controversy when Mabel leased their house to a Russian delegation who attended the signing of the Japanese Peace Treaty in 1951.

Despite his wealth in land, Romie suffered from money problems, which included $100,000 of tax and assessment liens against Monte Regio and $19,000 in street assessments. Romie’s plan was to sell lots in Peters Gate and recoup his losses. However, they filed bankruptcy in 1937 on $400,000 of debt. To add to their misfortunes, Romie and Mabel barely survived a terrible car accident in 1948. Although both lived, many believe Romie’s injuries contributed to his death, on June 3rd of that year. He is buried at Cypress Lawn in San Francisco.